What is the purpose of marketing?

The purpose of marketing is to persuade us to see value in products and services that we would not otherwise consider important or necessary to our lives. Essentially this means that we are trained to desire things not according to wants rather than actual needs.  This idea arose early in the twentieth century:

“We must shift America from a needs- to a desires-culture. People must be trained to desire, to want new things, even before the old have been entirely consumed. […] Man’s desires must overshadow his needs”

Paul Mazur was a leading Wall street banker working for Lehman brother. He also claimed that:

“The community that can be trained to desire . . . to want new things even before the old have been entirely consumed yields a market to be measured more by desires than by needs. And man’s desires can be developed so that they will greatly overshadow his needs.”

Over time,  ‘wants’ and ‘needs’ have blurred into one. Perhaps you won’t hear marketers admit that their job is to persuade people to purchase goods they don’t need. But that is still their primary purpose in the bigger picture of modern capitalism, or the “staggering machine of desire” as Mazur called it.

This machine wants to manipulate you to be a consumer above all else.  The system depends on constant desire for goods.  Over time, the The American marketing industry trained consumers to:

“…turn a blind eye to social inequities, to construct individual subjectivites around the purchase of commodities, and to view democracy as the freedom to choose between brands.”

Or in the words of Rage Against the Machine:

Environment
The environment exceeding on the level
Of our unconciousness
For example
What does the billboard say?
Come and play!, come and play!
Forget about the movement 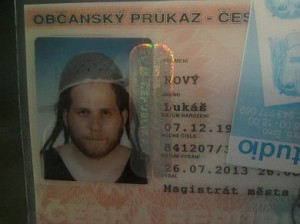 A Czech man has won the right to wear plastic kitchenware in his ID photo as part of this “Pastafarian” faith. Czech officials ruled that rejecting his request would be a breach of the country’s religious equality laws, and have subsequently turned the other cheek as the 28 year old, from Brno, updated his ID card with the controversial image.

In a statement from Brno City Hall, spokesman Pavel Zara explained: “The application complies with the laws of the Czech Republic where headgear for religious or medical reasons is permitted if it does not hide the face.”

Austrian Niko Alm previously won the right to wear a pasta strainer, but others in the US and Poland have failed.

Illinois Pastafarian Wants to Wear a Colander on his Head for His Driver’s License Picture, but Gets Rejected:
http://www.patheos.com/blogs/friendlyatheist/2013/06/22/illinois-pastafarian-wants-to-wear-a-colander-on-his-head-for-his-drivers-license-picture-but-gets-rejected/

Whilst this is a lot of fun, I suspect that the one thing all these cases have in common is the lack of a useful definition of religion (at least for legal purposes). Actually defining ‘religion’ is something that has divided intellectuals in religious studies, philosophy, sociology and anthropology etc.  for the last century. Very few satisfactory definitions exist.

Some might view determined Pastafarians who try their luck like this as troublesome time-wasters, but they might just be providing us with the perfect scenario for truly defining what religion is. Afterall, if somebody says they are religious, who are we, or the courts, to argue with them?  Is religion entirely subjective? We need an objective, workable definition of religion not just for amusing cases like in Austria and Poland, but also to settle more serious controversies – for example involving Scientology.

I’m currently working on a theory of religion that I hope will settle cases like the above – I hope to write more on this soon.